If it were, why would flowers put so much energy into attracting bees? And why would raindrops transform themselves into a rainbow when they encounter the sun? Because nature longs for beauty, and is only satisfied when beauty can be exalted. Outer beauty is inner beauty made visible, and it manifests itself in the light that flows from our eyes. It doesn’t matter if a person is badly dressed or doesn’t conform to our idea of elegance, or isn’t even concerned about impressing other people.

Beauty is present in all creation, but the danger lies in the fact that, because we human beings are often cut off from the Divine Energy, we allow ourselves to be influenced by what other people think. We deny our own beauty because others can’t or won’t recognise it. Instead of accepting ourselves as we are, we try to imitate what we see around us. We try to be what other people think of as ‘pretty’ and, little by little, our soul fades, our will weakens, and all the potential we had to make the world a more beautiful place withers away.
We forget that the world is what we imagine it to be.
We stop being the moonlight and become, instead, the pool of water reflecting it. Tomorrow, the water will evaporate in the sun. And all because, one day, someone said: ‘You are ugly.’ Or: ‘She is pretty.’ With those three simple words, they stole away all our self-confidence. And we become ugly and embittered.

At that moment, we can draw comfort from so-called ‘wisdom’, an accumulation of ideas put together by people wishing to define the world, instead of respecting the mystery of life. This ‘wisdom’ consists of all the unnecessary rules, regulations and measurements intended to establish a standard of behaviour. According to that false wisdom, we should not be concerned about beauty because it is superficial and ephemeral.

That isn’t true. All the beings created under the sun, from birds to mountains, from flowers to rivers, reflect the miracle of creation.
If we resist the temptation to allow other people to define who we are, then we will gradually be able to let the sun inside our own soul shine forth.
Love passes by and says: ‘I never noticed you before.’ And our soul responds: ‘Well, pay more attention, because here I am. It took a breeze to blow the dust from your eyes, but now that you have recognised me, don’t leave me again, because all of us desire beauty.’
Beauty exists not in sameness but in difference. Who could imagine a giraffe without its long neck or a cactus without its spines? The irregularity of the mountain peaks that surround us is what makes them so imposing. If we tried to make them all the same, they would no longer command our respect. It is the imperfect that astonishes and attracts us.

When we look at a cedar tree, we don’t think: ‘The branches should be all the same length.’ We think: ‘How strong it is.’
When we see a snake, we never say: ‘He is crawling along the ground, while I am walking with head erect.’ We think: ‘He might be small, but his skin is colourful, his movements elegant, and he is more powerful than me.’

When the camel crosses the desert and takes us to the place we want to reach, we never say: ‘He’s humpbacked and has ugly teeth.’ We think: ‘He deserves my love for his loyalty and help. Without him, I would never be able to explore the world.’
A sunset is always more beautiful when it is covered with irregularly shaped clouds, because only then can it reflect the many colours out of which dreams and poetry are made.

Pity those who think: ‘I am not beautiful. That’s why Love has not knocked at my door.’ In fact, Love did knock, but when they opened the door, they weren’t prepared to welcome Love in.’
They were too busy trying to make themselves beautiful first, when, in fact, they were fine as they were.

taken from “Manuscript found in Accra”

Join us this fall for a three-part Moon Series tea

Namaste & Happy Sunday Yogis! We are just on the

Wouldn't it feel amazing to shelf the COVID talk a

“I finished my Yogaworks training at @thriveyoga

Join us this Sunday at 7pm in Rainbow Park for sou

CB Yogis! We are bummed, and this news is tough, b

Join us starting this weekend for a moment of paus

Our Yoga Boutique is now open 7 days/week! . We a

Save 10% Off these deluxe Yoga Blankets! Our bouti

@thriveyoga.crestedbutte is thrilled to be partner

This is what 6 feet of Safe Distancing looks like

Our Virtual Studio is still live! We are offering 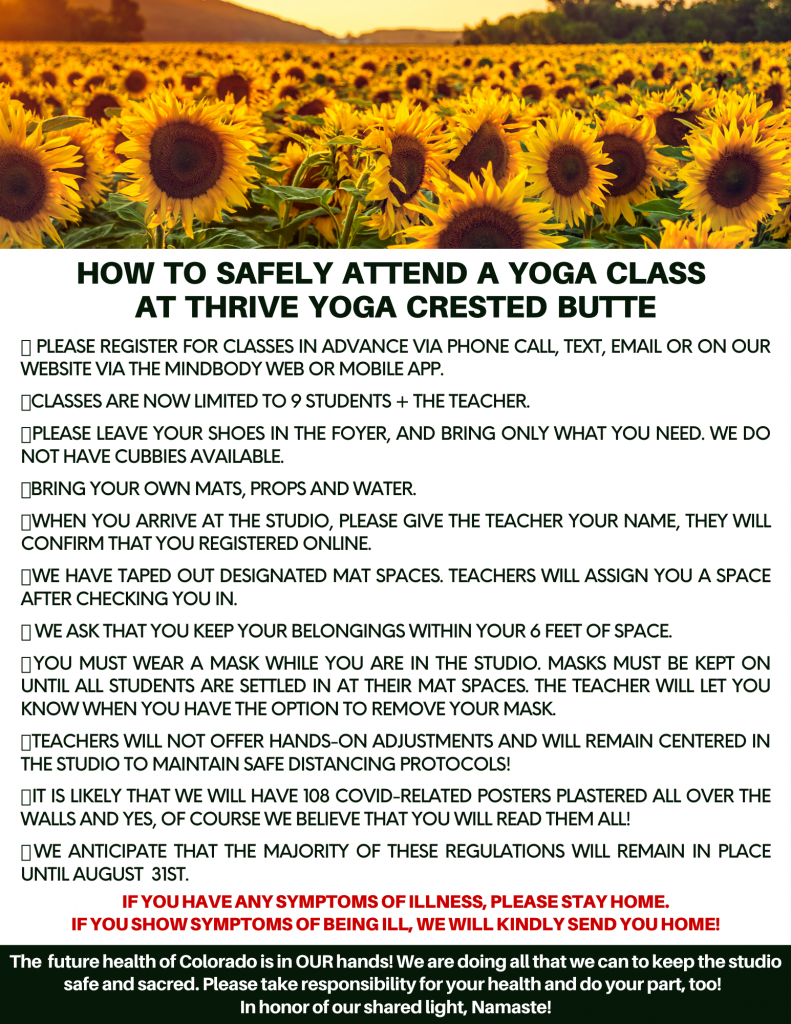 Do NOT follow this link or you will be banned from the site!
Social Share Buttons and Icons powered by Ultimatelysocial